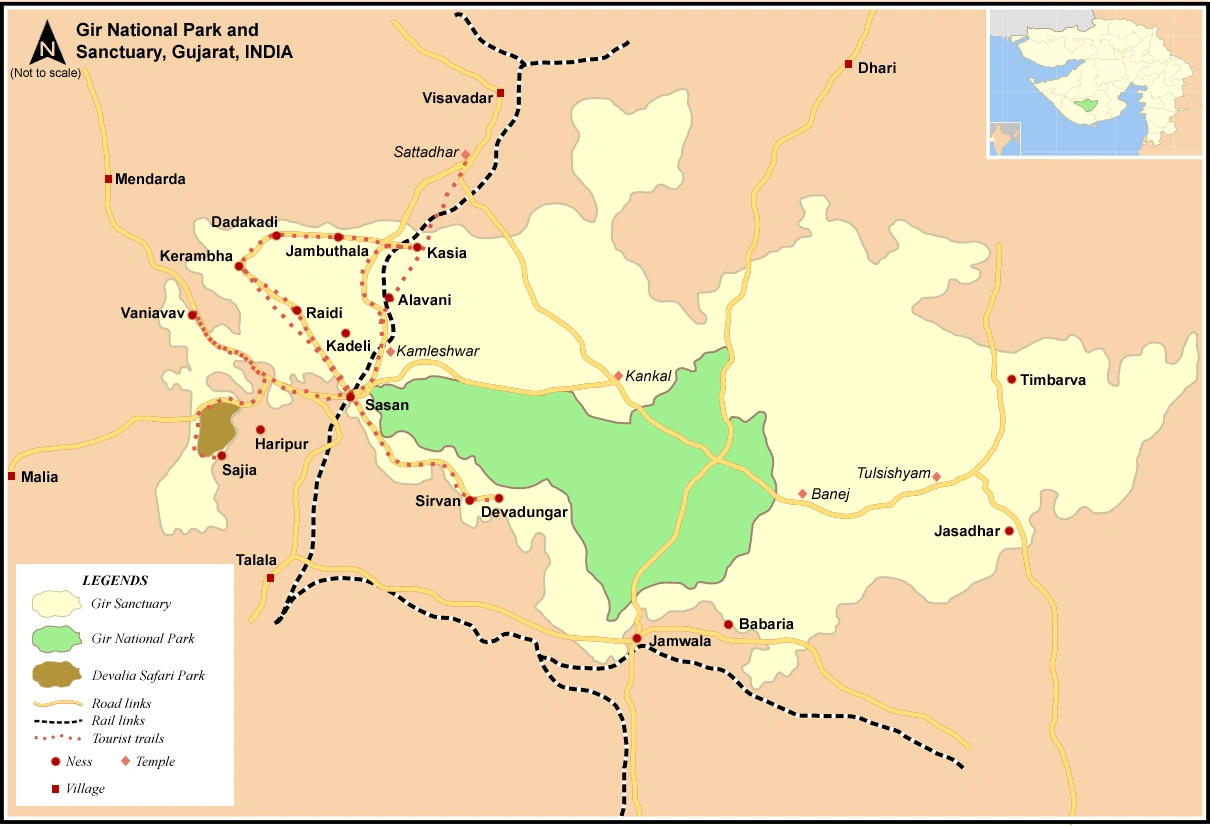 Sasan Gir National Park & Lion Sanctuary is the last home of the Asiatic Lion. Spread over an area of 1412 square kilometres near Junagadh district in Gujarat . The terrain is rugged with low hills and the vegetation is mixed deciduous, with stands of Teak, Acacia, Jamun, Tendu and Dhak trees, interspersed with large patches of grasslands. On the hills of the trees are sparse and stunted .

Flora : Thick vegetation in Gir can be looked at in four ways. The first is the Teak forest nearly half of the protected area. The main trees are Khair, Sadad, Timru, Babul, Amla, Moledi, Dhavdo, Kadayo and Bahedo. The non-Teak forests, which comprise the remaining forest consists of tree species like the Khair, Dhavdo, Sadad, Timru, Amla, Moledi, Kadayo, Salai, Simal, Khakhro, Ber and Asundro. A distinct belt of vegetation is found along the main rivers and streams. Species like the Jambu, Karanj, Umro, Vad, Kalam, Charal, Sirus and Amli are found here.

Mammals : Gir Sanctuary is the last and the only home of the critically endangered Asiatic Lion. The most common animal that can be sighted in the sanctuary is the Chital or Spotted Deer. Other attracted mammalians are Nilgai, Chinkara, Sambhar, Black Bucks, the four horned Antelope, Wild Boar, Indian Flying Foe, Grey Musk Shrew, Indian Hare, Pale Hedgehog, Small Indian Mangoose, Small Indian Civet, Indian Pangolin, Indian Porcupine, Ratel, Indian Fox, and Jackal. The three smaller wildcats - the Jungle Cat, Desert Cat and the Rusty Spotted Cat, also inhabit Gir forest, which shows that the forest is not just meant for the protection of Lions, but the whole of the cat family.

Birds Life : Birds in the park include the Paradise Flycatcher, Bonelli's Eagle and Painted Sandgrouse. Three unusual Reserves, the Nalsarover Lake and Sanctuary, where large numbers of water-birds can be seen. An estimated of 300 species are found inhabiting Gir National Park over the years. Many wildlife experts say that if Gir has not been a Lion sanctuary, it could have easily passed off as a protected area for the incredible diversity of birds that it harbours. The avifauna in here occupies the forest floors, small plants and shrubs and even the canopy of the trees. The Paradise Flycatcher, Black Headed Cuckoo Shrike, Pied Woodpecker, Bonelli's Eagle, Creset Serpant Eagle, Painted Sandgrouse, Bush Quail and Grey Patridge are among the varieties that are commonly found over here.


Jeep Safari: Viewing the wild life in the Gir's is best done, by a drive jeep around the forest. The Forest Department organizes the lion shows every Sunday for the tourists. There are also special trips along with the trained guides who give the tourists direction for the sanctuary tour. The best time to observe this ferocious carnivore is to grab his sight during the dawn and dusk when they are on the prowl.

Message us on WhatsApp

Save the Gir lion

Copyright © 2020 Save the Gir lions USA - All Rights Reserved.